In 2016, the MACP Board of Directors established the Thomas A. Hendrickson Legislative Advocate-of-the-Year Award. This is awarded to an individual that works exceptionally hard on behalf of the Michigan Association of Chiefs of Police in the legislative process and whose efforts are substantially above and beyond those which would be expected by a typical MACP member.

In February of 2021, the MACP Board of Directors unanimously voted to name Daniel Pfannes the 2020 Thomas A. Hendrickson Legislative Advocate of the Year. 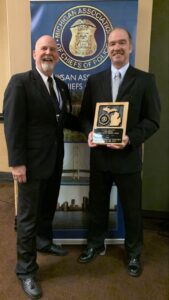 Dan started his police career in Westland and retired as Chief in March 2007 to take the position of Undersheriff for the Wayne County Sheriff’s Office. He has served in that position under three different Sheriffs and was recently named Executive Chief by newly appointed Wayne County Sheriff Raphael Washington.

In 2020, a series of Criminal Justice reform bills were introduced that dealt with issues ranging from bail, decriminalization of certain offenses, expungement, citations, appearance tickets and other issues. The complexity of these issues and the need to have people well versed in the issues available was critical and the MACP Legislative Committee created a sub-committee and Dan Pfannes volunteered to join that committee.

Because of his expertise and knowledge of jails, bail, and court procedure, Dan ended up taking the lead on many of these proposed bills. He worked tirelessly to provide analysis and suggested changes to the Legislative Committee.  Additionally, he attended numerous meetings with members of PEW, the State Court Administrators Office, the Prosecuting Attorneys Association of Michigan, and advocated our position to leadership of both the Democratic and Republican parties.

When the bills came up for testimony, Chief Pfannes testified at many hearings representing both the MSA and the MACP. This was especially critical as it demonstrated to the Legislature the unity of the MSA and MACP on the issues.

There is little doubt that the efforts of Dan produced significant results as much of the proposed legislation was either killed, altered to a point it could be supported, or improved from terrible to bad, which in this case was an enormous victory!

Dan has continued his dedication to legislative issues once again by volunteering to join the MACP Legislative sub-committee that was formed to address the bi-partisan 12-bill police reform package.

On behalf of the Michigan Association of Chiefs of Police, it is my honor to present the Thomas A. Hendrickson Legislative Advocate-of-the-Year Award to Executive Chief Daniel Pfannes.