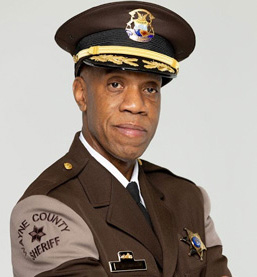 Wayne County Sheriff Raphael Washington’s primary duties are to uphold the constitutional laws of the county. The mandated county duties are the protection of the county parks, courts, and jails. He has nearly four decades of solid law enforcement and management experience. Prior to joining the Sheriff’s Office in 2009, he worked for 24 years as a Detroit Police Officer. During his 24 years of service to the Detroit Police Department and the citizens of Detroit, he rose to the executive level in that agency. He’s a lifelong Detroit, Michigan, and Wayne County resident with an extensive law enforcement background. He’s active within the community and serves on several community boards. He uses his knowledge and experience serving as the Director of Security for Greater Grace Temple and Pentecostal Assemblies of the World.

Sheriff Washington is also a member of the National Rifle Association and is MCOLES Certified. He has served as a firearms instructor for many years and is passionate about educating the community on gun safety. He holds numerous local and national certifications and seeks to earn many more. Sheriff Washington’s approach to instruction and his personal attention to his students has earned him numerous accolades from those who have attended his classes. As the top leader within the Wayne County Sheriff’s Office, Sheriff Washington is committed to serving the citizens of Wayne County.