12th Annual Light Up the Night 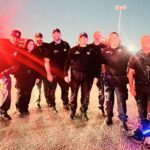 After a long break due to pandemic restrictions, the Wayne County Sheriff’s Office was out at the 12th Annual #LightUpTheNight – Emergency Vehicle Car Show & Open House in Canton. This year, donations went to the Wayne County Sheriff Honor Guard! Our team provides honors and stands watch over law enforcement officers who have made the ultimate sacrifice. They strive to ensure the family of the fallen are provided with the support needed as they navigate through the mourning process and adjust to their new way of life. We humbly thank you for your continued support! 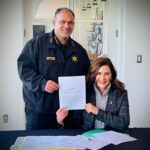 There was a major announcement for law enforcement across Michigan on September 27th — especially for Sheriff’s Offices across our state! Sheriff Washington thanked Governor Gretchen Whitmer for passing additional funding for our road patrol officers. Undersheriff Mike Jaafar was there to represent the Sheriff and the men and women of the Wayne County Sheriff’s Office. The bill signed into law will give the WCSO much greater funding to patrol our secondary roads, and in turn, will enhance our ability in keeping our residents safe!

It was a beautiful Sunday in September at Perfecting Church in Detroit. Sheriff Washington, Chief Dunlap and members of the WCSO, the Detroit Police Department, Southfield Police, Westland Police, Michigan State Police, and Perfecting Church were able to show their appreciation to ALL Law Enforcement Officers who continue to protect and serve our community. Sheriff Washington also had the privilege of affirming Bishop-Elect Marvin L. Winans into the ranks of the Wayne County Sheriff’s Chaplains! 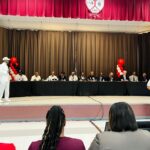 Sheriff Raphael Washington was honored to be a panelist at the Chief of Police Town Hall Meeting to discuss gun violence and its devastating impact on our community. Detroit Edison Public School Academy was packed and candid questions were asked. Sheriff Washington and the men and women of the WCSO hope to keep this conversation going. We hope to all remain actively involved in finding REAL solutions involving education, technology, awareness, enforcement, unity and truly walking the walk! To start, the WCSO will be distributing a flyer to parents and guardians in the county beginning at all Detroit elementary schools. Stay tuned! Thank you to Chief James White, our dedicated panelists and to everyone who came out. It was an uplifting and productive evening in Detroit. 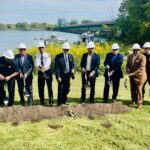 This Project includes construction of park [...] 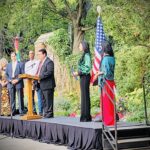 Sheriff Washington and Recruiter Mark Diaz had a great time at the Mexican Independence Day Celebration with the Mexican Consulate of Detroit at the Oakland University Golf Course! Thank you for allowing them to be a part of such a meaningful event — and WOW the food! Mark said later: “hopefully my tastebuds grow back!” 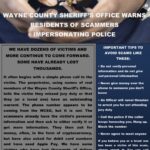 The Wayne County Sheriff’s Office would like to warn the public about an ongoing phone scam in the county that has already robbed people of thousands. We have dozens of victims already, and more continue to come forward.

It often begins with a simple phone call to the victim. The perpetrator, using names of real members of the Wayne County Sheriff’s Office, tells the victim they missed jury duty or that they (or a loved one) have an outstanding warrant. The phone number appears to be coming from the WCSO, but it is not. The scammers already have the victim’s personal information and then ask to either verify it or get more information. They then ask for money, often, in the form of cryptocurrency, but have also asked for debit card numbers and have used Apple Pay. We have some victims who have lost thousands of dollars and believe there may be countless others who [...]

Mounted Unit joined teens, children and parents in River Rouge for a special Back to School block party 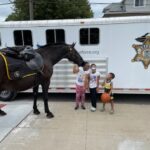 The Wayne County Sheriff’s Office Mounted Unit joined teens, children and parents in River Rouge for a special Back to School block party! The kids loved meeting, petting and taking pictures with the horses, and we’re sure our horses loved the attention, too! 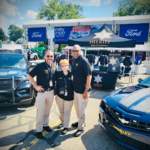 Our recruiters stopped by the 2022 Ferndale Emergency Vehicle Show! They’re always working hard to find new talent to join the Wayne County Sheriff’s Office. Our Camaro always seems to get a lot of attention, along with our tricked out recruiting Explorer. Recruiter Mark Diaz said, “it was a hoot!” If you’re interested in a career in law enforcement, don’t hesitate and JOIN OUR TEAM! https://www.sheriffconnect.com/wayne-county-sheriffs-recruitment-office/ 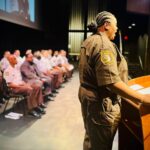 The Wayne County Sheriff’s Office New Officer Entry School Graduating Class of 08-22’s motto was “Live with honor, serve with pride.” We could not be prouder of them! Please congratulate these 11 Graduates for their hard work!